NFC - Near Field Communication - wireless power at your fingertips !! 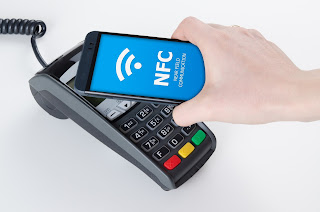 Few years from now your credit cards, bus pass, train tickets, loyalty cards for high street coffee shops will be gone due to digital transformation and you only carry your phone.

Welcome to Near Field Communications (NFC), a contact less, WiFi style technology that could already be in your smartphone, and could soon be a regular feature of your commute.

Near field communication (NFC) is a radio wave technology for smartphones and similar devices which allows to establish communication with each other by touching them together or bringing them into close proximity, usually no more than a few centimeters.

Unlike Bluetooth, no pairing code is needed, and because it's very low power, no battery in the device being read.

Today many of your tasks can be done by NFC:


Some futuristic uses of NFC:

Today Samsung, PayPal all are entering this market.

NFC is further used in tags which are small stickers that contain NFC chip and based on programming it can change various settings, launch apps and perform some actions just by holding your phone near to it.

Are you still diving your old '96 Honda Civic's but want to treat it as Tesla? Just slap a NFC tag on dashboard and program it to turn on Bluetooth, GPS and 3G, open Google Maps, and whatever else you need on your smartphone. Then show off to your dear ones J

NFC is still in its trial phase, but it's got a big future.
Email ThisBlogThis!Share to TwitterShare to FacebookShare to Pinterest
Labels: Digital Transformation, mobile payments, NFC